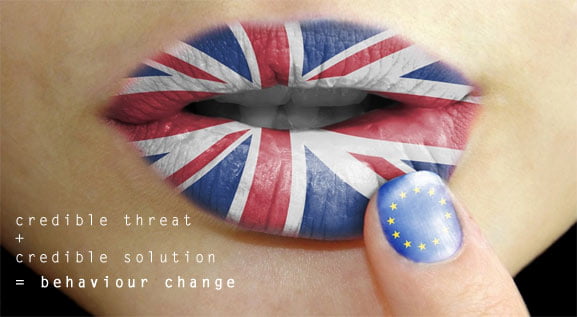 Sometimes we humans are remarkably simple-minded. It should be the easiest-peasiest thing in the world for politicians and media and evil-minded individuals to influence us, as well as the virtuous and high-minded who want us to change behaviour for our own good. When you work as a coach you draw on these principles every day.

Yet somehow what is known to so many coaches does not seem to be known to the highly paid strategists and politicians whose failure to access convincing arguments for staying in the EU has created the constitutional mess we now find ourselves in.

The first rule is that if you want to change people’s behaviour you need to understand that threats alone do not work. If you want people to give up the nasty habit of smoking or of gambling away their life savings or of getting fat, it’s no good just frightening them. There is a mass of evidence to show that it fails. It’s too unpleasant to take in, we block it off, we stick our fingers in our ears and pretend we haven’t heard.

What you do instead is deploy this formula: credible threat + credible solution = behaviour change.

This is what the Leave side did. They buffed up resentment at East Europeans who were willing to do the jobs that British people scorn. They propagated the lie that £350m a week that could go to the NHS was going to the EU. Then they said, the solution is simple: vote Leave. Vote Leave and we will get control of our borders and have lots of money to spend on our beloved NHS.

Remain believed that it was enough to frighten people with the prospect of recession and of every household losing £4,200 a year if we left the EU. Mr Osborne took it further with his threat of an Austerity Budget if the vote was to leave. This seemed bullying. It was like your doctor saying, ‘You will die at 40 if you go on smoking’.

The second rule is that emotion has far greater appeal than logic. Remain, unfortunately had not taken Psychology 101 when they went to Strategy School. Instead they took the Finance Module followed by the Logical Reasoning Module. Remain, fatally, decided to add Logic to their already mistaken strategy of making threats without offering solutions (other than keeping the status quo). Remain never made the emotional case for staying in Europe: that we are Europeans to our core; that thanks to the EU we have had 70 years of peace after centuries of devastating conflict; that our economy has thrived and could do so even more; that we should celebrate our membership and look to improve the ways the governance happens rather than feebly opting out. They avoided the words loaded with emotion, skilfully deployed by their opponents (country, patriot, history, control, pride, heritage, great) and went instead for the dull lifelessness of pound, exchange rate, productivity, single market.

Now we have to live with the result. It is unlikely that we can ‘get control of our borders’ or ‘get our country back’ in  the draconian way that the most furious, hurt and left-behind Leave voters imagined would happen, the silliest of them thinking that it would take place tomorrow as in the reported conversation from a young Hungarian friend, educated here, pays taxes here, has lived in the UK for 15 years, who told me that one of her neighbours had said on June 24th, ‘Are you sad now that you’ll be going home?’ These Leave voters are going to be upset and probably angrier than ever when they realize that their naïve hopes have been subtly rubbed away by protracted negotiations and the compromises of a Tory party that knows how much its biggest donors want and need the free movement of people.

As a coach working with the vagaries, splendours and absurdities of human psychology for so many years, I am still puzzled about why our most senior politicians don’t know stuff that any experienced coach could have told them.

The Queen arrived at my door. She stood there, a sturdy figure, wearing an elegant pale blue coat, a jaunty hat in matching blue with one of her Launer handbags looped over her left wrist. I didn’t invite her in,... END_OF_DOCUMENT_TOKEN_TO_BE_REPLACED

So you got the job and you’re now Director, or VP, or Chief Officer for – whatever. Congratulations! I’m delighted when coaching clients get that promotion. But it’s no surprise when about six months later they reappear in my coaching... END_OF_DOCUMENT_TOKEN_TO_BE_REPLACED

It’s a first supervision session for this coach and I’m exploring how her early life shaped her adult beliefs and behaviour. She looks dubious. ‘I had a perfectly happy childhood’, she says, hesitating a little. ‘Except we did have to... END_OF_DOCUMENT_TOKEN_TO_BE_REPLACED

My coaching client, B, is looking at the floor. He is six months into a promotion, struggling to grip the astonishing slipperiness of the new skills the job needs. ‘I suppose’, he says slowly, ‘I’m a bit of a fraud.... END_OF_DOCUMENT_TOKEN_TO_BE_REPLACED