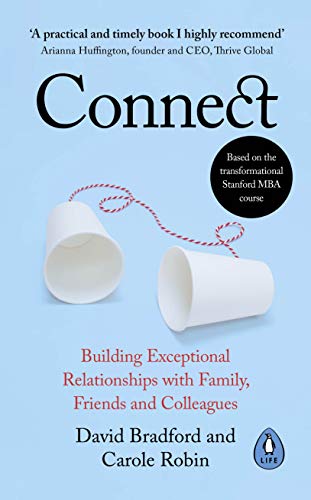 It’s amazing how often the trail of what is good and lasting in social psychology leads back to the great Kurt Lewin (https://en.wikipedia.org/wiki/Kurt_Lewin.) If you want proof of why leadership style influences performance, look to his classic action research with boys’ groups in the 1940s, then to his coining of the now everyday term ‘group dynamics’. His theories about change are still relevant. Then there is his influence in developing ‘Encounter Groups’ or T (Training) Groups in the US in 1947. Here, among other leading lights in social psychology, he influenced the humanistic psychologist, Carl Rogers. Now this trail leads to the fascinating new book Connect, where two people who ran the Interpersonal Dynamics course at Stanford (where Lewin himself had spent some time) have written a book where the benefits of this course can be available to all of us. The course is run as T-Group. The book features stories reflecting the typical problems that can beset relationships.

Bradford’s and Robin’s course is the most popular on the Stanford MBA course, and is known fondly as Touchy-Feely. The authors do not describe the mechanics of the course but I’m guessing it’s like the ones I have been involved in myself as coach, facilitator and participant. Maddeningly, on these courses there is no agenda except to get on with the other people in the group. There is a facilitator who refuses to be a ‘leader’. Mayhem breaks out early. People who live largely in their heads are confused and angry. What IS all this touchy-feely stuff? Why are we here? Can I go now? What? You mean my titles and my busyness are not relevant? That’s right.

Connect uses five running case studies to illustrate how often good intentions go astray. It concentrates on the pinch-points – the mini crises that are pointing to resentments and tensions that have remained unresolved for many years. The most interesting to me is the daughter-father duo where Rachel and Phil, both doctors, have got stuck in an unhealthy dynamic. Seemingly, Phil just can’t help himself. He still sees Rachel as that little girl who needs the guiding hand of a father. He is a compulsive advice-giver. Rachel neither wants nor needs his advice. It’s annoying her mightily. She’s tried to explain but Phil doesn’t pay attention. Rachel loves her Dad and doesn’t want to hurt him or to destroy the relationship. First she has to tell him, using tactful but straightforward language that she doesn’t feel ‘heard’ and to show him how ingrained his habit of advice-giving is. This works well. Later she wants a more fundamental change and the authors are realistic here about the likelihood of this happening.

The messages of this book will be familiar to coaches. All of us will have alerted clients to the dangers of rushing to judgment and of thinking they can be mind-readers about other people’s motivation. We have been trained to notice how often, when clients are under stress, they see the world in a binary way: it’s black/white; right/wrong. Where a relationship is in difficulties, we’ve counselled against focussing too soon on solutions rather than looking at what each party needs. This book will be a great read for clients who want all of this brought to life through storytelling – and a good reminder for us as coaches, too.

The Queen arrived at my door. She stood there, a sturdy figure, wearing an elegant pale blue coat, a jaunty hat in matching blue with one of her Launer handbags looped over her left wrist. I didn’t invite her in,... END_OF_DOCUMENT_TOKEN_TO_BE_REPLACED

So you got the job and you’re now Director, or VP, or Chief Officer for – whatever. Congratulations! I’m delighted when coaching clients get that promotion. But it’s no surprise when about six months later they reappear in my coaching... END_OF_DOCUMENT_TOKEN_TO_BE_REPLACED

It’s a first supervision session for this coach and I’m exploring how her early life shaped her adult beliefs and behaviour. She looks dubious. ‘I had a perfectly happy childhood’, she says, hesitating a little. ‘Except we did have to... END_OF_DOCUMENT_TOKEN_TO_BE_REPLACED

My coaching client, B, is looking at the floor. He is six months into a promotion, struggling to grip the astonishing slipperiness of the new skills the job needs. ‘I suppose’, he says slowly, ‘I’m a bit of a fraud.... END_OF_DOCUMENT_TOKEN_TO_BE_REPLACED