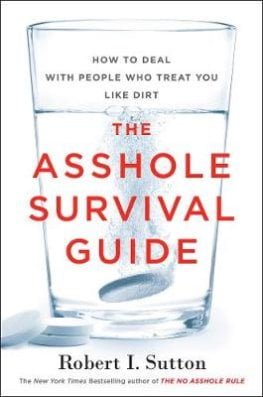 Yes, it’s a vulgar title and I can imagine the fights he had with his publishers over it. And maybe it’s a little less shocking than the British version of the a-word. But really there is no other word that sums up the behaviour.

What characterises an asshole?

These are people who take credit for your work, who yell at you in front of everyone else when you are a few minutes late and without asking you what caused the delay, who have favourites, who over-talk, who interrupt every few minutes, who plot, scheme and lie, who use abusive or sexist language and when you object tell you that it’s only banter and where’s your sense of humour. These are people who give you menial tasks they know you hate and insist on every last detail being redone if it’s not exactly to their standard, who call meetings for 6pm on a Friday, write emails in the middle of the night and shout at you the next day because you didn’t reply immediately, who talk about people behind their backs passing on scurrilous gossip and who steal other people’s food from the office refrigerator. Asshole behaviour is catching and Robert describes one despairing person talking about an entire culture, an ‘Asshole Factory’, where ‘someone should tent the building and spray it with asshole insecticide’.

All coaches will have heard about behaviour like this and quite a few of us have worked with clients accused of it.

What should we advise clients to do if they are becoming the focus of an asshole’s attention? Here are some hints from Robert’s book:

* Face up to your excuses and denials, for instance the fantasy that it is getting better. If you can get away, do, but take your time and think it through carefully. Flouncing out is rarely a good idea longer term

* Reduce your exposure to them by minimising contact at meetings, avoiding long email exchanges or getting into arguments which you cannot win. Hide in plain sight by doing only just enough to maintain contact or use head-down invisibility as a protective cloak

* Use what Robert calls ‘mind tricks that protect your soul’. This means using techniques such as mentally reframing the asshole behaviour as ‘funny’ or saying ‘it’s only a job, I can go home soon.’ Concentrate on the fact that you are not to blame: they are the problem, not you. Consider developing some insight into the troubling difficulties that might lie behind their behaviour; this makes tolerance easier

* Fighting back can be risky especially if you do it recklessly. Document abusive behaviour making a contemporaneous note on your computer. Record it if it is possible to do so without exposing yourself to danger

* Enrol others: It will help because it is unlikely that you are the only target and when many people give the same story, as we see with the Harvey Weinstein and other cases, it becomes impossible for senior people to ignore.

None of this is easy and Robert reminds us of the vicious punishment meted out to those who challenged the cyclist Lance Armstrong, one of the great assholes of all time. Armstrong made threats and took draconian legal action, often ruining the lives and careers of the many people who told the truth about his lying, bullying and cheating.

As all the recent cases of egregious sexual harassment by the rich and famous expose so brutally, assholes depend on troupes of enablers, people who facilitate, cover up and look the other way. They are afraid, just as the asshole’s victims are afraid, often with good reason. We will encounter these people in the coaching room too, where they will often agonise about whether to collude or to take the enormous risk of challenging and refusing. Or, even more perilous, to speak up publically about what they know and therefore to risk punishment themselves.

As a result of reading this book, I feel better equipped to discuss the range of options open to any individual client, knowing that only they can make the fine judgements about what is right for them. Strength in numbers does seem an attractive proposition: I worked some years ago with a woman whose boss displayed many of the destructive behaviours described in Robert’s book. My client knew that her team mates felt the same. A petition was organized to the boss’s boss declaring a vote of no confidence plus ample evidence to back up all their assertions. Within a month the man was gone.

One warning: it is very unwise to become obsessed with the terrible behaviour of the asshole. You become consumed with anger, your energy gets warped, your desire to get revenge can become unmanageable. When this happens it is most unlikely that the saga will end happily. One of our roles as coaches is to offer perspective and to help clients protect themselves from lasting harm in such cases.

As one client said to me, ‘I heard the outrage and anger in my voice as I described his appalling behaviour to you. Coaching calmed me down. I saw that it was very unlikely that anything I could do could change him, in fact it could possibly have spurred him on he’d  have enjoyed the fight. Instead I quietly got my CV ready and planned my exit. Best thing I ever did!’

David Bradford and Carole Robin, Penguin Life, 2021 It’s amazing how often the trail of what is good and lasting in social psychology leads back to the great Kurt Lewin (https://en.wikipedia.org/wiki/Kurt_Lewin.) If you want proof of why leadership style influences... END_OF_DOCUMENT_TOKEN_TO_BE_REPLACED

When the first lockdown was really biting in 2020, I was part of a coaches’ Zoom get-together. The overarching question was how the pandemic was affecting our income. Some coaches spoke despairingly about the way their training and facilitation work... END_OF_DOCUMENT_TOKEN_TO_BE_REPLACED

A thoughtful participant on our recent coach training course at the Guildhall School of Music and Drama raised this issue. ‘It feels as if sometimes it might be useful to say to a client that something similar has happened to... END_OF_DOCUMENT_TOKEN_TO_BE_REPLACED

When your coaching is informed by learning about trauma, you will be able to elevate its value many times over. The very word ‘trauma’ can strike coaches with horror. Isn’t this exactly the kind of territory that we are repeatedly... END_OF_DOCUMENT_TOKEN_TO_BE_REPLACED